How many times have you been to a competition, seen someones works and asked the question “How did you do that?”. Well, tonight was the night we found out.

Helen organised a few of us to share our little secrets. Not really that secret, but enough to inspire some work!

So who did we have?

First up, James Allan describing his little worlds – or extreme panoramas. Fortunately, James put it into a slide presentation, which I’ve reproduced below:

Keen readers will recognise the feature image – and may even see it in our upcoming Calendar (on sale soon!)

Next, Jo Tabe described how she produced some of her stunning HDRs. Yes, there is a tool in Photoshop. Yes, it works. But there are other ways.
First up, get your images – and it need not be all -2, -1, 0, 1 and 2 stops. It can be just the top or bottom three. You can even cheat in Adobe Camera Raw and derive it from one image.
Once you had your image, the merging part took over. Jo’s tool of choice is PhotoMatix – a plugin for Photoshop, Lightroom or Aperture. The trick is to play with the images, allowing for motion in your subject (like trees) and removing halos that form in standard HDR images. As she pointed out the aim is have a high dynamic range – not surreal art.

Alberto Guirelli then ran through some very simple image manipulation to turn bland images into stunners. He should know – he keeps getting awards!
His trick was to use crop and vignette, and importantly, curves. This is the key – set the white and the black points in the image first. Then crop to what you need. His example of the bland looking Tuscan hillside took all of 2 minutes to transform into a stunning wide range image.
The vignetting method from Alberto was a bit more subtle. Use the lasso tool to outline your subject. Then set a smallish feather (about 50 pixels) and apply an unsharp mask to that area (at about 130-140%). Now, invert the selection and change the feather to about 250 pixels. Then darken it with curves. Now you have an irregular vignette that works!
Finally, the tool of choice that shuts the judges up – the clone tool in Photoshop. Get rid of unwanted branches, insects, people etc with the click/drag of a brush!

Next up – me. I rather like macro photography (probably stemming from my work years ago in a histology lab working with all sorts of microscopes – dissecting, dark field, transmission electron, scanning electron etc).
In the plain old photographic world we quickly run up against lack of sharpness and detail due to diffraction as we try to magnify images more and more. The answer lies in Focus Stacking. Here is a little presentation I put together: 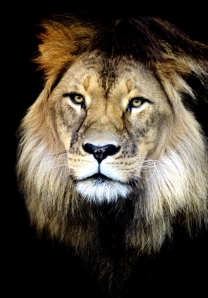 Helen – our MC for the night – then showed us how she made King of Beasts (that great lion image) – starting with the lion with the cage behind it – in all its distracting glory. However, using Nikon Capture she demonstrated the removal of that grid, the ultimate vignette, and then the trick that Nikon Capture (which is apparently based on Nik Efex) allows modification of colour range brightness and contrast at an extreme (almost pixel) level. This allowed her to alter fur, reflections and edges with extreme accuracy.

Richard Akroyd then followed up Helen’s demonstration with more about Nikon Capture showing the broad range of what Capture (ie Nik Efex) can do. Could well be worth the $149!

To follow the high tech world of fine level manipulation, Mark Pedlar presented the image manipulation tech of Photoshop layers and the right selection of images. His Hell’s Gate image is a photo that’s been 7 years in the making when he first saw the gate. Assorted attempts at making it look good were not 100% successful. However, with perseverance we can now show how he did it:

So there you have a summary of the nights proceedings. Lots of lessons and methods, but not all of them high tech. In fact, some really simple techniques that result in some of our presenters gaining the highest awards in the amateur photographic world. As Jo said, sometimes all you need to do is play with the tools you have and learn what they do to get the most out of them. Sage advice

This entry was posted on 15/08/2014 by ChrisS. It was filed under Blackwood Photography Club News, Member presentations, Opinion, Workshops .